This isn’t a typical self development book. There is no feigned positivity. No fluff. Only truth about how people become the best in their field.

What does relentless mean? 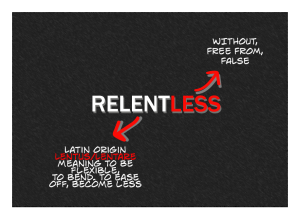 Grover writes that there 3 types of people in the world: Coolers, Closers, and Cleaners.

When Coolers are given a job, they complete it. Don’t expect anything exceptional. They don’t aspire to create an impact.

Next are Closers. Closers deliver higher quality results than Coolers. They can be exceptional, but too many variables involved in the task can throw them off because their knowledge base and arsenal of skills are limited.

Cleaners are 10 steps ahead of everyone. They’ve achieved mastery because they’re highly skilled. They’re the first ones to get there, and the last ones to leave – in the gym, at the office, at PTO meetings. They don’t second guess themselves. They’re not focused on other people, they’re focused on winning.

Cleaners continue to push after everyone’s had enough. They’re able to achieve the flow state as first described by Dr. Csikszentmihalyi. They know who they are, and are comfortable with their dark side. Not only are they comfortable with the darkness, they thrive on it.

Pressure doesn’t deter cleaners. When everyone’s panicking, they’re the ones staying calm and who everyone else looks to in chaotic times. The intensity they train at is so far beyond what everyone else puts in that they don’t compete with anyone else, only themselves. They’re experts in their field, and they’re so in tune with their instinct they make calculated decisions with confidence and without hesitation. Cleaners stand alone. They’re misunderstood by everyone else and trust few people so their inner circle is extremely small. When everyone else is celebrating, cleaners are already thinking about the next goal, the next game, the next project.